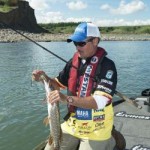 Pro angler Jeff Kriet earns his living catching largemouths and smallmouths, but can’t resist playing with northern pike when he’s on their turf up north.

When veteran bass angler Jeff Kriet has a tournament on lakes where smallmouth bass dominate, the Yamaha Pro always gears up for another species, as well. That fish is the northern pike, and Kriet looks forward to catching them, even though he can’t take them to the weigh-in scales.

“They’re really fun to catch because they produce such violent strikes, fight hard, and grow to huge sizes,” explains Kriet, whose largest northern pike to date weighed just under 20 pounds. “I often catch northerns when I’m looking for smallmouths, and it’s hard not to just spend the rest of the practice day going after them.”

Found primarily across much of the northern United States and Canada, northern pike are one of the most popular sportfish in freshwater because of their aggressive nature. Although fish in the five to 10 pound range are the most common, fish topping 20 pounds certainly are not uncommon. Interestingly, many anglers consider the fish’s length more important than its weight, with 40 inches or longer being the trophy standard.

Though pike of 5 to 10 pounds are most common, much larger fish are caught each year, with some topping 20 pounds.

Northern pike are probably even more popular in European waters where they tend to grow larger; the present world record, just over 55 pounds, was caught in Germany in 1986, but heavier fish have been reported. Outside of North America, their range includes not only Europe but also Russia and even North Africa, and historically, pike have been popular as far back as Roman times.

“When I’m looking for smallmouth and find weedbeds in fairly shallow water, I know I’m probably going to get hit by a northern,” laughs Kriet, “so I brace myself for the strike. Just running a big spinnerbait, or sometimes a buzz bait, along the edge of a weedbed or over the top of it will get their attention.

“They seem to be very visually oriented fish, and they usually feed by hovering motionless and ambushing their prey as it comes by. I’ve also caught them around rocks, stumps, windy points, and even boat docks, but vegetation was never far away.”

The Yamaha Pro’s favorite pike lure is a 3/4- or 1-ounce spinnerbait, usually with a chartreuse/white skirt and matched with 20-pound fluorocarbon line, a stout baitcasting rod, and a high-speed reel. This combination lets him cast further and then burn the spinnerbait back just under the surface as fast as he can reel it. He’s also caught pike on a variety of other lures, including spoons, crankbaits, and even topwater plugs, and frequently, he sees the pike following the lure and actually striking.

Kriet says a jumbo spinnerbait “burned” fast is one of the best offerings to attract a toothy pike, but they hit an assortment of lures.

“The strike is certainly one of the most exciting parts of northern pike fishing,” Kriet continues, “because it’s really hard and usually close to the surface. Sometimes when I see them following, I’ll stop reeling for a second, or just twitch my rod to change the lure’s vibration, but most of the time, I just keep reeling and the fish smash it. For me, one of the keys to catching them has always been reeling as fast as I could. I think they’re some of the most aggressive fish I’ve ever caught in freshwater.

“Sometimes, hooking and playing a struggling smallmouth or even a smaller northern will attract a larger pike to strike that fish. I know that when I’m in a really good area, I usually see a lot of fish and it’s actually hard to keep them from biting. A friend of mine told me about catching more than 20 pike one morning, including one 41-incher that weighed over 20 pounds.”

The only real problem Kriet has with catching northern pike is that their violent strikes frequently destroy his lures, even the heavy wire spinnerbaits. “Actually, that’s not such a bad problem to have,” smiles the Yamaha Pro. “Each year when the different tournament schedules are published, I immediately look to see if any of the premier northern smallmouth lakes are included and if they are, I just start packing extra spinnerbaits for the pike.

“That’s how much I enjoy fishing for them.”