Mighty Muskie on a Fly Rod
from The Fishing Wire

Dan Small, well-known host of “Outdoors Radio” sent along this tale of his adventures on the way to the recent Outdoor Writers Association of American conference at Lake Placid, N.Y., proving he not only talks a good game, he knows how to play. 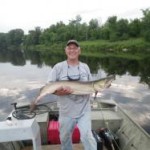 On my way to Lake Placid for the Outdoor Writers Association of America conference last week, I met my brother Mike and son Jon at Jellybean’s Riverside Campground on the St. Regis River in St. Lawrence County, in northern New York State. Our plan was to spend several days fly fishing for muskies, then head to the conference.

Last year on that same river, Mike caught and released a 51-inch muskie (photo attached) that was later certified as a 30-lb. tippet class world record by the Freshwater Fishing HOF in Hayward, WI. He also caught a 49.5-incher on that same river. His fly of choice: a Hawg Frawg, which he designed.

When I arrived a week ago Wednesday afternoon, Mike and Jon had fished hard with no luck for two hours from a canoe, fighting the gusting winds that preceded a strong cold front on its way across the state. The temperature had been 95 degrees in Syracuse and was still in the mid-80s in St. Lawrence County when I arrived at our campsite. Eager to get in some fishing before the storm, I didn’t bother to suit up, but just grabbed one of Mike’s 10-weight St. Croix rods rigged with a Hawg Frawg in what he calls a “Sting Bee” yellow/black pattern.

Dan’s brother, Mike, caught this monster 51 inch pure muskie a year earlier from the same location, also on a fly rod. It’s been designated the 30-pound tippet record for the species by the Freshwater Fishing Hall of Fame.
Wearing shorts and Crocs, I walked the shoreline of the campground where they had been fishing and made a few casts in a big backwater. Mike had tied a two-foot section of sink-tip line into the leader to make the floating fly dive a foot or so. I was casting, then stripping the fly back toward me. I had only been fishing about 10 minutes when a fish hit my fly. The fight lasted just a few minutes, but the fish that had taken hold turned out to be huge.

Mike netted the fish, then ran to get his measuring stick. When we had unhooked and measured it, we realized it was a hybrid or “tiger” muskie, a cross between a northern pike and a muskellunge. It measured 39 inches nose to tail. I did not get a circumference or weight estimate. After photos, we released the fish and it swam off strongly.

Later at the OWAA conference, I asked NY Department of Environmental Conservation fisheries biologists Doug Stang and Ed Woltmann what they knew about tigers in the St. Regis. They told me the DEC does not stock tigers or any muskies in the St. Regis, as that river is in the St. Lawrence River watershed. All muskies there are naturally spawned. 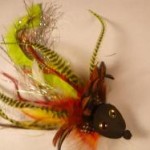 They said my fish was most likely a natural hybrid produced when a male northern and female muskie happened to spawn in the same area. Woltmann also told me that the St. Lawrence was losing some shallow pike spawning habitat, which was causing some northerns to spawn later in spring and in deeper water, which may have facilitated some natural hybridization.

Wednesday night, heavy rains caused the river to rise about two feet. We fished from shore on Thursday with no luck. Jon had one strike but missed the fish.

Early Friday morning, Mike had two fish boil on flies before I hooked about a 40-incher on a big streamer pattern. I captured the strike, fight and landing of that fish on a GoPro mounted on my head, but we never got to measure it because it spit the barbless hook, bit right through the brand-new (brand name withheld to protect the manufacturer) landing net and swam off. Mike’s X-rated reaction (also captured on the GoPro) was hilarious. That was the end of our muskie fishing, but I had had enough action to keep me fired up for the entire conference.