If you have a boat with multiple modern outboards, you have a lot of options when it comes to joystick control of your vessel for docking or tight maneuvering. Joysticks are particularly great for sidling up to the dock. But what about solving the challenges anglers have setting the right drift to keep lures in the zone, or trolling ultra slowly to keep live baits alive and active? Some marine companies are ramping up boat-control tools that will simply help catch more fish. 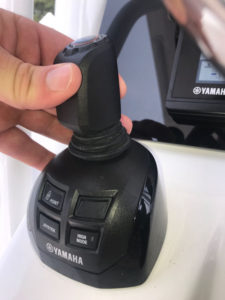 The Yamaha joystick system with SetPoint not only makes docking a no-brainer in multi-outboard rigs, it’s also a powerful fishing tool for holding precise position offshore despite wind, waves and current, and can also control trolling speeds at much lower levels than is possible with conventional controls. (John Geiger Photo)

For more than a decade we’ve had joystick helm controls like Mercury’s BowHook, SeaStar’s Heading Hold and more recently Yamaha’s SetPoint. To see these systems in action is a front-row seat to the future of boating. In fact, it’s astounding to see each motor working independently, changing direction and throttle as if they had minds of their own. Yet the outboards work in unison with each other, tapping GPS technology and advanced system integration to keep the boat in a position or in a certain heading despite wind, waves and currents.

Like the other companies, Yamaha has offered similar tools with its Helm Master and SetPoint trio of boat-control modes — StayPoint, FishPoint and DriftPoint. But recently, Yamaha upped the game and brought another boat-control tool, a function called Pattern Shift, to the SetPoint array. It lets the boater troll below standard in-gear speeds. When set, it automatically bumps the throttle in and out of gear, as a captain would do to create a snail’s-pace drift over productive structure or waters. Under some conditions, the system can troll at 1/2 mph or less. You can actually set it to be in gear 90 percent of the time and out of gear 10 percent, or in gear 10 percent and out of gear 90 percent or any 10 percent increment in between.

It’s frustrating to try to quickly fish a hot spot—say a small reef outcropping– before the boat floats over the top of it and past it. It’s obvious that companies like Yamaha are getting into the minds of captains to find out what they need to position their boats perfectly despite groundswell, tides, winds and current. And the systems are basically intuitive. They’re very simple to operate.

How much does a system like this cost? That’s not easy to answer on a new boat because it’s often standard equipment on more fully equipped models. As an option, however, you might expect to pay nearly as much as you would for an additional outboard.

On a recent fishing trip in the Chesapeake Bay with Captain Shannon Pickens, a longtime guide on Maryland’s Eastern Shore, I saw one of the Yamaha systems in action.

Captain Pickens used his Garmin fish finder to locate a school of resident striped bass on an oyster bar in about 30 feet of water.

“I marked them and then moved off to deeper water to drift up to it,” said Pickens, who is based on Tilghman Island.

But the wind was coming from the south against the outgoing tide. If he simply drifted over the structure, the bow probably would have swung to port with the current, and anglers would have been creeping up the port side gunnels toward the bow. Pickens likes to keep his anglers around the stern of the boat, where there is more room to maneuver in the cockpit.

Summer stripers on Chesapeake Bay are not usually huge, but there are plenty of them and they put up a spirited fight on light gear.

“I put the bow into the wind, set Pattern Shift and let them vertical jig over the zone from the stern,” he said. “They might not know it’s the system doing a lot of the work, but they’ll notice more fish on their line.”

Pickens could have chosen to manually bump his binnacle throttle to keep the port Yamaha F300 coming in and out of gear while also keeping clients safe, watching for other vessels and all the things a captain does when there are six people aboard dropping lines. But Pickens chose to use Pattern Shift. It kept the boat in the zone longer by controlling the heading (bow quartered away from the wind) and the speed (about 2 knots north to south) with a 50-50 ratio of forward-thrust-to-neutral bumps to let anglers work the bar slowly and naturally. And that’s one of the best features of Pattern Shift — the bumping and very low rpm, especially when coupled with Yamaha’s innovative Shift Dampening System, created little noise under the hull.

Pickens said these fish are highly pressured and shut down with prop wash or noise from above. The crew was able to keep rods tight on the resident summer stripers when other boats in the area were watching and waiting.

Non-migrating striped bass, also called rockfish in this part of the world, will take live baits, trolled umbrella rigs or plastics. Pickens had his crew throwing artificials on light tackle: Z-Man scented jerk shad and paddle-tail swimbaits in the 6- to 8-inch range on 1-ounce lead jigs. The 12-pound fluorocarbon leader was tied to 10-pound braid with a Uni-knot. Hot bait colors were purple, white and electric chicken, a combo of chartreuse on top and green on the bottom.

Thanks in part to the impressive SetPoint position-control system from Yamaha, we had brisk action on summer rockfish. We caught none of the giants for which the area is famed—Bloody Point, where we were fishing, produced the 67-pound, 8-ounce state record, and occasionally turns out fish approaching 50 pounds—but we kept busy with stripers around the lower end of the 19-inch slot, and gained new respect for the ways technology can affect our fishing.