A Few Thoughts on the Bassmasters Classic

The “Alabama Mafia” again looks to make its presence felt in the 2016 Bassmaster Classic, to be fishing March 4-6 at Grand Lake northeast of Tulsa, Oklahoma. 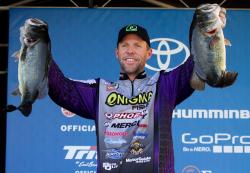 Aaron Martens, Angler of the Year in 2015, is likely to be among the favorites to win the 2016 Bassmaster Classic at Grand Lake, Oklahoma, March 4-6. (Photo Credit B.A.S.S.)

With nine Classic contenders, more than any other state, Alabama is living up to its name as the tournament bass fishing capitol of the nation–perhaps not surprisingly since B.A.S.S. was born here in Montgomery, and has returned its headquarters to Birmingham after a brief flirtation with Florida.

Aaron Martens, a Californian now living near Leeds, Ala., is likely to rank near the top of the 54-man Classic field; he’s the reigning Angler of the Year (AOY), and has consistently proven himself one of the best in the world over the last several years on the Bassmaster Elite Series Tour.

Also at the top of his game is Justin Lucas, now a Guntersville resident, who finished 2nd in this year’s AOY race. Another young gun who may do well is Auburn grad Jordan Lee of Vinemont, who finished 9th in the AOY in just his third season of Elite competition.

Other Alabama anglers who made the Classic cut are Matt Herren of Ashville, Greg Vinson of Wetumpka, Chris Lane of Guntersville, Randy Howell of Springville, Russ Lane of Prattville, and tackle-maker Boyd Duckett, also now of Guntersville. 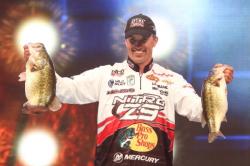 Edwin Evers lives virtually on the shores of Grand Lake, and will know it better than any other angler in the field—a likely factor in success if the bite is tough. (Photo Credit B.A.S.S.)

One name conspicuously absent, to the misfortune of the weigh-in crowds, is funny-man Gerald Swindle of Warrior. Win or lose, Swindle is always a crowd favorite who can draw a laugh, but he did not make the Classic cut this year.

Two Oklahoma anglers loom large in the field this year because Grand Lake is virtually their home water: Edwin Evers lives at Talala, close enough to hit the lake with a long cast, and Jason Christie lives at Park Hill, a short drive south. The last couple of years, home-lake familiarity has been a key factor, with S.C. native Casey Ashley winning at Hartwell in 2015 and Randy Howell winning at Guntersville in 2014. Cliff Pace of Petal, Miss., was the winning angler at Grand Lake in 2013, but he’s not in the Classic field this year. The event is being held a week later than it was last time at Grand, and anglers are hopeful they’ll get a break compared to the freezing temperatures and high winds they battled on the last visit.

The Tulsa Classic in 2013 recorded the second highest attendance in history, with more than 106,850 fans visiting one or more of the Classic venues. Total purse will be more than $1 million, with the winner receiving $300,000. The Bassmaster Classic Outdoors Expo provides an added attraction at the event in downtown Tulsa, with hundreds of boat, motor and tackle manufacturers displaying their new-for-2016 gear to the public for the first time.

For details on the event, visit www.bassmaster.com.