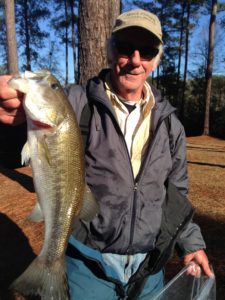 Only one I caught

Last Saturday the Potato Creek Bassmasters held our January tournament at Sinclair. In seven hours of casting in the cold and wind, 12 fishermen landed 32 bass weighing 68 pounds. There were four bass weighing more than five pounds each!

Doug Acree won with five weighing 12.80 pounds, Raymond English placed second with five at 9.14 pounds, Richard Dixon was third with five weighing 8.58 pounds and Mike Cox came in fourth with three weighing 7.72 pounds. Tom Tanner drove up from Florida to catch one bass, but it was the right one, weighing 6.13 pounds for big fish.

I guess I used up all my luck the week before at Jackson. I had taken my boat to “Lanier Jim” in Gainesville to run dedicated wires to my front depthfinders to try to get rid of interference from the trolling motor. When I got home that night I noticed my circuit breakers were flipped so I re-set them. Everything seemed to work ok.

My first stop Saturday I put my trolling motor down and nothing happened, it had no power. The wind blew me against a dock and I checked everything I could think of, first re-setting the circuit breakers, since that is a common problem. Nothing helped.

During the day I tried to fish, letting the wind blow me down banks when it was in the right direction and putting down the power poles to hold the boat in one place when it was shallow enough. It was very frustrating.

At 9:00 as I blew toward a tree in the water I cast a jig and pig to it. Just before the boat hit the tree I felt a bite and landed a three-pound largemouth. That was the only good thing that happened all day!

Not long before weigh-in I set my power poles near a dock and cast around it. I felt a thump in a brush pile and brought in half a worm when I set the hook. After putting on a new one I cast under the dock. At the angle I was sitting I could not really see my line.

Slowly pulling my worm, I felt resistance but thought I was over a board on the dock, and I was, but it pulled back. A bass had sucked in my worm and I was trying to pull it over the board. By the time I realized it was a fish and set the hook it was too late, and I missed it.

That was a terrible start to my year in that club. I hope my luck is better at Sinclair today in the Sportsmans Club tournament at Sinclair. At least the weather is supposed to be much better.