Atlantic Salmon: A Species in Need of a Spotlight

NOAA Fisheries
from The Fishing Wire 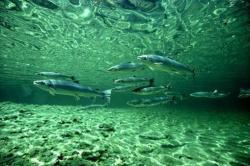 “The coincidence, at least, in the erection of the dams, and the enormous diminution in the number of the Alewives, and the decadence of the inshore cod fishery, is certainly very remarkable. It is probable, also, that the mackerel fisheries have suffered in the same way, as these fish find in the young Menhaden and Alewives an attractive bait. The same remarks as to the agency of the Alewives in attracting the deep-sea fishes to the shores and especially near the mouths of rivers, apply in a proportional degree to the Shad and salmon.”

Atlantic salmon are an iconic New England species. In addition to the ecosystem role these fish play, they have been an important indicator of economic health in our region. Atlantic salmon once supported lucrative commercial and recreational fisheries, as well as the small bait shops, gear stores, and amenities for fishermen that contributed to the economy. Before this, Atlantic salmon were important to Native American tribes for historical and cultural reasons. Tribes relied on watersheds and their natural abundance of sea-run fish, including Atlantic salmon, for physical and spiritual sustenance.

In the 1900s Atlantic salmon from Maine were so highly valued that for more than 80 years, the first one caught in the Penobscot River each spring was presented to the U.S. President. The last Presidential salmon was caught in May 1992 by Claude Westfall, who presented a 9.5 pound Atlantic salmon to President George H.W. Bush. Westfall’s was the last presidential salmon because there are now too few adult salmon to sacrifice one even for the President.

To draw attention to this iconic species and our plan for saving it from extinction, NOAA Fisheries recently launched the “Species in the Spotlight—Survive to Thrive” initiative. Atlantic salmon are one of the eight highly at-risk species in the nation that we have identified as needing special attention. These endangered species have declining populations, but also have a high probability of survival if we can marshal the resources to turn their trajectories around.

As part of the Species in the Spotlight initiative, we developed a five-year roadmap to aid the recovery of Atlantic salmon. The plan, which will be released in early 2016, outlines specific actions to save this species and will involve our regional partners in conservation. The primary focus of the plan is to restore access and quality to river habitat in Maine and work to better understand and address threats in the marine environment.

SALMON IN RIVERS ARE LIKE CANARIES IN A COAL MINE 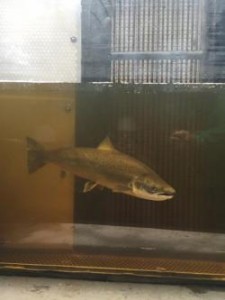 Atlantic salmon are anadromous fish which means they spend a portion of their lives in freshwater and a portion in the ocean. Anadromous fish are indicators that the links between freshwater, estuarine, and marine ecosystems are clean and well-connected. The connections within the ecosystem are so strong that many of the factors that are impacting salmon’s survival are also affecting other species such as American shad, alewives and even some marine fish stocks such as Atlantic cod. Healthy anadromous fish populations support important marine food webs, providing a forage base for commercially important species like striped bass, cod, and haddock. When river systems are blocked or are too polluted to support these fish populations, the effects are felt throughout the entire ecosystem. The return of Atlantic salmon, along with other anadromous fish, would indicate the return of a healthy and connected system.

FROM RIVER TO SEA: TOO MANY DAMS

“The principal decline in the New England salmon fishery considerably antedated 1880, however, and was coincident with the erection of dams or other barriers to the passage of fish” – C. Atkins (1894).

One complicating factor for Atlantic salmon is that they are anadromous fish. When they return from the seas between Northeastern Canada and Greenland to the rivers to spawn, hundreds of dams block or impair their ability to reach the critical freshwater habitats that are still capable of supporting spawning. As noted in the quote above, this problem was created over many, many years and so, it will take time to restore connectivity for this species.

Listing Atlantic salmon as endangered in 2000, and expanding the listing to include large rivers like the Penobscot and Kennebec in 2009, helped spur 35 fishway constructions and dam removal projects in Maine, including the removal of two major hydroelectic dams (Great Works and Veazie) as part of the Penobscot River Restoration Project. Since the Penobscot River is home to roughly 75 percent of the adult Atlantic salmon returns in the U.S., restoring access to this river is particularly important. In the Penobscot River basin alone, there are still more than 130 dams that block or impede access to approximately 90 percent of salmon’s historic spawning and nursery habitat. There is still much work to be done.

Dam removals can bring back fish to habitat that was previously inaccessible. After the removals of the Fort Halifax Dam (2008) and the Edwards Dam (1999) on the Kennebec River, alewife and blueback herring (collectively called river herring) returns increased from less than 100,000 in 2006 to more than 2,150,000 in 2015. Similarly, on the Penobscot River, after the Great Works (2012) and Veazie (2013) Dam removals, along with improved passage at other upstream dams, documented returns of river herring increased from 2,000 in 2011 to an estimated 585,000 in 2015. Roughly 1,800 American shad passed the Milford Dam (now the first dam on the Penobscot River) for the first time in 100 years. Additionally, in Fall 2015, researchers found three endangered shortnose sturgeon in habitat upstream of the Veazie Dam remnants for the first time in a century. In 2015, biologists counted 731 Atlantic salmon at the Milford fish lift. (See map of Penobscot River Restoration Project).

Our five-year action plan outlines specific actions to stop the decline of this species and put it on a path towards recovery, including restoration of the ecological connections between the freshwater and marine environment and restoration of habitat quality. Among the pieces of the plan are to: review hydroelectric power plant dams up for licensing to ensure that they have effective fish passage; encourage removal of dams and other barriers to fish passage where possible; work with other countries to limit Atlantic salmon catch in the ocean; and, continue research and monitoring of Atlantic salmon.

You can help by encouraging or participating in programs to conserve and restore land and water resources that benefit migratory fish and promote abundant, suitable and accessible habitats for Atlantic salmon. This can include working with communities to remove or provide passage around blockages such as round culverts or dams that block or impair movement of Atlantic salmon, maintaining forested riparian areas around rivers and streams, and implementing land use practices that protect streams from pollution and excessive erosion.

For more information on this initiative and what you can do to help Atlantic salmon, please contact Kim Damon-Randall, Assistant Regional Administrator for Protected Resources at Kimberly.Damon-Randall@noaa.gov.