From tourism to marine recreation and sport fishing, reefs play an important role in local economies. They’re also essential to the health of the ocean, providing habitat for a variety of marine life and increasing coastal resilience to storms.

A flat plain of clay, mud and sand, the natural bottom of the Gulf of Mexico offers very little natural hard bottom and reef habitat. But Interior’s Rigs to Reefs program is changing that by turning old offshore platforms into artificial reefs.

Not long after new platforms are installed in the Gulf, marine life take up residence in and around the platform’s steel frame supports — called jackets. As the platforms age, the populations of fish and other marine organisms that live near the structure increase. A single platform can provide habitat for thousands of fish.

When platforms are no longer economically viable, instead of removing the structure (and with it, much needed marine habitat), Interior’s Bureau of Safety and Environmental Enforcement works with energy companies and the states to make the platforms into permanent artificial reefs. Instead of paying to decommission a rig, the energy company pays to have the structure reefed and donates money to the state where the rig is to assist with the management of their artificial reef program.

Since the program was created in 1985, more than 500 platforms in the Gulf of Mexico have been converted into artificial reefs with 400 additional platforms eligible to be converted to reefs.

This program is a win for ocean life, outdoor enthusiasts and states. Artificial reefs provide shelter, food and other necessary elements for biodiversity and a productive ocean. This in turn creates a rich diversity of marine life, attracting divers and anglers. And states like the program because the increased tourism and commercial fishing benefits local economies. 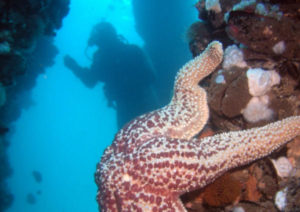 Lots to see on a reef

Creating Living Shorelines
Back in the 17th century, oysters were abundant in the estuaries of the Atlantic Coast, but over time, development, pollution and commerce led to their decline. Now these mollusks are flourishing once again at sites in Virginia, New Jersey and Maryland, thanks to Interior.

Working with public and private partners, Interior’s U.S. Fish and Wildlife Service is building artificial oyster reefs and creating living shorelines. In Virginia at Chincoteague National Wildlife Refuge, over 13,500 oyster castles were installed. These cinderblock-like structures provide a spot for young oysters (called spat) to stick to and grow. Along New Jersey’s coast at Gandy’s Beach, the Service, partners and volunteers have built more than 3,000 feet of living shorelines using oyster castles. They started in 2014 and are seeing amazing results creating a self-sustaining reef system. In Maryland, they’re placing reef balls — concrete cone-line structures — in a 287-acre stretch of the bay to promote oyster growth.

Why is a thriving oyster colony important? Healthy oysters have profound implications for the environment, water quality and the local economy. One oyster can filter 50 gallons of water each day — more oysters means cleaner water. Flourishing oyster populations are good for coastal fishing communities that depend on the species for food and to earn a living. They also provide food and habitat for other marine organisms. Not to mention, living coasts prevent erosion and act as wave breaks, making salt-marsh habitat and infrastructure more resilient in the face of future storms.

These are a few of the ways Interior is leading on ocean conservation and building artificial reefs to ensure fish and marine life populations are healthy.