By Kirk Deeter, Trout Unlimited
from The Fishing Wire 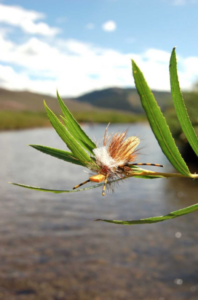 Years ago, I had a conversation with the late, great Dr. Robert Behnke on the subject of trout seeing colors, and how much that mattered in terms of fly selection. His answer was a good one that has since stuck with me, and it greatly influences how and when I choose certain fly patterns.

He said that fish do indeed see colors, and that they are perhaps more perceptive to colors on the blue-violet side of the spectrum. Add to that the fact that when you go down in depth in a lake or river, certain colors lose their brilliance, starting on the red side of the spectrum.

For example, a scuba diver will tell you that they need a red filter for their underwater camera, because after only a few feet, what above the surface looks more like candy apple red, actually looks more of a muted gray. Thus, certain fly selections make more sense. For example, you can turn over a million rocks in the river and never see a natural bug that looks remotely like a purple Prince Nymph. But a purple Prince works because it grabs attention. The pink San Juan worm you run in high water, really looks more pinkish-gray to the fish several feet down in a run, and pinkish-gray happens to be what many annelids look like.

The short lesson from Behnke was that when the hatch was on, and you’re matching naturals, you need to be much more exact with colors. If it’s a PMD hatch, and the fish know it, you need to be yellowish-creamish-pinkish with the fly. It doesn’t make much sense to throw a purple parachute Adams, for example in the middle of a natural baetis hatch. If, on the other hand, you’re just prospecting, and want to grab attention, the purples and the flashes and all that work better, but usually underneath the water surface.

For fish looking up to eat dry flies, they’re looking into a silvery glare most often. There, Behnke added that the silhouette of the fly is paramount. And that’s why the simple black, rubber-legged beetle, or Chernobyl Ant is hard to beat. The naturals might be tan or green or brown, but if there aren’t an abundance of naturals, a black terrestrial is a great choice as a “prospecting” fly.

On the other hand, if the hoppers are hitting the water en masse, and the fish know it, that’s when you might switch back to the yellow or tan body. Just a thought. And of course, this might all change from river to river, and season to season. But the theory was inspired by one of the greatest minds to study trout.

And it does seem to play out on the water. At least that’s my story and I’m sticking to it.

Kirk Deeter is the editor of TROUT Magazine, a publication of Trout Unlimited, and the vice president of Trout Media. He lives and works in the mountains outside of Denver.