Don’t Get Hit By a Jumping Fish!

From the Florida Fish & Wildlife Conservation Commission
from The Fishing Wire

Many of us have seen the jumping carp of the Mississippi River slamming into boaters and these are more than enough to cause serious damage-but boaters in Florida are sometimes confronted with airborne fish that may weigh 100 pounds and stretch 5 to 6 feet long!

It’s an ugly fish with a face only another sturgeon could love. It’s the prehistoric-looking, sucker-mouthed, scute-covered Gulf sturgeon and it’s creating quite a stir on the rivers in North Florida.

Although the sturgeon residing in the Suwannee River have received the bulk of the media attention during the last several years, the fish are present in quite a few rivers in the northern portion of the Sunshine State. 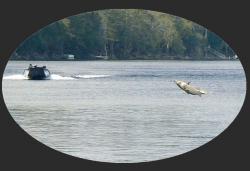 The sturgeon can trace their roots back 200 million years. And even though they’re just doing what they’ve been doing for eons, it’s causing a problem for some boaters. The Gulf sturgeon makes its presence known by jumping out of the water. With adult fish reaching up to eight feet in length and weighing up to 200 pounds, they can make quite a splash.

Boaters have been injured while traveling on the Suwannee River and other rivers in the Florida Panhandle when they are struck by the jumping fish. There’s no apparent warning…the sturgeon just jump. If a boater is in the wrong place at the wrong time, there’s a chance of injury.

In past years, boaters have been injured by direct strikes with sturgeon. However, in 2013, there were no reported sturgeon strikes on the Suwannee River. The FWC would like to keep that trend going for 2014.

Scientists believe there are approximately 10,000-14,000 Gulf sturgeons that make the Suwannee their summer home, with far fewer numbers in the seven other major U.S. rivers where Gulf sturgeon are known to spawn. These rivers are the Apalachicola, Choctawhatchee, Yellow, Blackwater, Escambia, Pearl, Pascagoula The Suwannee River, which flows from the Okefenokee Swamp in southeastern Georgia down through northern Florida, is one of the most pristine rivers in the country – with no dams for returning sturgeons to contend with. The Suwannee is considered one of the last “wild” rivers in Florida.

The fish use almost the entire length of the river to complete their complicated life history. The sturgeon spawning grounds on the Suwannee are 140 miles (220 kilometers) upstream from the mouth. Unlike salmon, which die after spawning in freshwater, sturgeons – which can live to be 25-plus years old – spend summer in the river, then swim back down the river to winter in the Gulf.

Sturgeon return to the eastern Gulf of Mexico during the winter, where they feed heartily. They typically do not eat while they are in the river – losing somewhere around 20 percent of their body mass. Because of this extended fast, biologists wonder why the fish would use energy jumping out of the water.

When they do eat, Gulf sturgeons are bottom feeders. They have barbles – catfish-like whiskers – that help them search sediments for prey, which they vacuum up with their sucker mouths.

Despite their long history, Gulf sturgeons were listed as threatened under the Endangered Species Act in 1991. The sturgeon is listed as a species of special concern in the state of Florida.

Why are these fish listed? There are many reasons. Their Gulf-wide habitat has been destroyed or greatly altered. Dams have prevented the sturgeon from migrating to old spawning areas. Dredging and other navigation maintenance may have eliminated the deep holes where sturgeon congregate. They were overfished to the point where Florida took the unprecedented action in 1984 of banning harvesting, capture, or “take” to prevent their extinction, just as we did for Bald Eagles. To make things even tougher for the sturgeon, it takes many years for the fish to reach breeding age, slowing population recovery.

What FWC has done

When the reported strikes began increasing in 2006, FWC mounted an intense public awareness campaign to let people know these fish were present and could injure those boaters enjoying the Suwannee. The agency message of “Go slow on the Suwannee” for better reaction time if a sturgeon did leap out of the water was stressed.

Signs were posted at all Suwannee River boat ramps and “Go Slow” decals were handed out to remind boaters to go slow while traveling on the river.

FWC personnel coordinated with elected officials from the five counties in north Florida affected by this issue.

A news release was put out in the spring, alerting boaters that the fish are migrating back into the Suwannee from the Gulf of Mexico.

What boaters can do

Go slow: The best course of action is to go slow. This gives more time to react and if you are hit, the force of the blow is much less at 10 mph than it is at 35 mph.

Wear your life jacket: Some boaters don’t like wearing a life jacket due to its bulkiness or fit. However, there’s been a revolution in life jacket design, and there are lighter, more compact and less restrictive models on the market. They include lightweight over-the-shoulder and belt-type inflatables, in addition to vest-type life jackets. If you’re hurt and unconscious, a life jacket will help keep you afloat. FWC suggests getting a type that will have you float face up.

Be alert: Pay attention to your surroundings. If you’re in an area where you see sturgeon jumping, slow down and get closer to the shoreline. The fish tend to stay in the deeper sections of the river.

Designate an operator: Don’t boat and drink. If you’re impaired, you have slower reaction times. If alcohol is consumed on a vessel, there should be a sober designated operator.

Boat safe: Keep passengers off the bow of the boat.

The Suwannee River is a beautiful part of Florida and should be enjoyed. The FWC wants boaters to know that these fish are out there and they do jump. Just be prepared, go slow and have fun.

GULF STURGEON AT A GLANCE

Range: Gulf of Mexico, from Florida to Louisiana.

Diet: Gulf sturgeon in saltwater feed on invertebrates – brittle starfish, small crustaceans such as ghost shrimp and crabs, lampshells, marine worms, and lancelets (a group of primitive animals, fishlike in appearance, usually found buried on the ocean floor). In freshwater, Gulf sturgeon generally do not feed or seek out prey.

Status: Protected. Listed as a threatened species under the Endangered Species Act (ESA) since 1991. Also covered by Appendix II of the Convention on International Trade in Endangered Species of Wild Fauna and Flora (CITES) since 1998. Human interactions are restricted to observation and research; no harvest is allowed.