New York City. Just the name conjures up images of the Empire State Building, Lincoln Center, Central Park, the Statue of Liberty– and great fishing for striped bass. Well, maybe the fishing reference is a little strange to some. The Big Apple might be the city that never sleeps, but it is also surrounded by water that comprises one of the major spawning and nursery areas for the equally iconic Atlantic striped bass. The Hudson River, East River, Harlem River, Western Long Island Sound, Raritan Bay, Jamaica Bay and the New York Bight make up a lot of water, and no one knows it better than Capt. Frank Crescitelli of Finchaser Charters, based out of Mansion Marina on Staten Island. We caught up with Crescitelli for a little early-season striped bass fishing in Raritan Bay aboard his Yamaha-powered 32-foot Regulator® in late April. 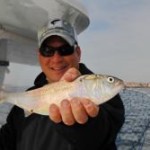 Menhaden are a favorite baitfish for New York stripers throughout warm weather, but this year exceptionally cold water has slowed the baitfish bite and made clams a better offering.

“It’s been a long, cold winter,” Crescitelli commented, “and the bay waters are still a bit cold so we’re going to be ready to do whatever it takes to catch a few bass. I’ve got fresh clams, and there are pods of menhaden right here in Great Kills Harbor. We’ll stop and catch some live bait before we go looking for stripers.”

In a more typical year, stripers would have already been in residence in big numbers because they come to this area to stage for a 75-mile run up the Hudson River to spawn in fresh water. Unfortunately, this has been anything but a typical year. The winter was very cold with lots of snow, and March and April have been much cooler and wetter than usual. Once the water temperature rises into the mid-50s, the bite will be on with good striper fishing straight through the end of June.

In the meantime, Crescitelli demonstrated some techniques that work well in the spring, and promised to share a little about the Fisherman’s Conservation Association, an organization he helped found and now helps run. He also told us about his pride and joy, the Manhattan Cup, a prestigious charity striper tournament now entering its sixteenth year.

We left Great Kills Harbor and headed west back toward the headwaters of Raritan Bay. “When the water is cold, shallow areas with dark mud bottom warm up quicker,” Crescitelli advised. “That’s if the sun decides to make an appearance. When you get a little outgoing tide after a sunny day and the water temperature jumps a degree or two, the fish turn on.”

He worked flats adjacent to channel edges where the tide creates rips, and also fished around some rock structure using the live menhaden as bait. He marked a few fish and had a couple of run offs on the big baitfish, but it became apparent the cold water had the fish playing with the bait, but not eating it.

“There’s a fine line between bass slurping down a live menhaden or just picking it up, running a little, maybe scaling it, and then dropping it,” Crescitelli said. “The deciding factor is usually water temperature. If it’s just a couple degrees too cold, you may want to take a shot with clams.” 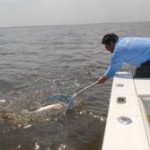 Striper caught on a clam bait

This striper grabbed a clam bait fished on bottom in the Raritan Reach area.

He moved to a different flat near the edge of Raritan Reach Channel and settled back on the anchor. Crescitelli recommended light outfits rigged with fish-finder rigs, sinkers and smaller circle hooks. We baited them with whole, fresh-shucked surf clams. He also started chumming, tossing cut up clams into the water to get a good scent trail going to lead the bass in to the baits. He said serious clam fishermen will put a bunch of broken up clams, shell and all, in a large chum pot and suspend it under the boat.

“Clam fishing isn’t my favorite,” he said. “I’d rather fish with live baits, plugs or fly rods, but sometimes you have to do what you have to do to catch fish and when the water is cold, bass eat clams when pretty much all else fails.”

While we waited for the bass to make an appearance, Frank told us about the FCA (Fishermen’s Conservation Association), an organization he helped to start. It’s a 501(c) 3 non-profit organization whose mission is to promote the “Conservation Triad” access, habitat, and smart fisheries management. Financial support provided by FCA directly benefits the marine waters of New York, New Jersey and Connecticut, with a special emphasis on introducing inner city kids to fishing through a program called “Hooked for a Lifetime.” FCA is also working to attain gamefish status for striped bass in New York State waters. 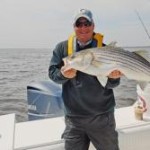 This spring bass went about 22 pounds-and soon went back over the side to head for the spawning areas upriver.

“The FCA was started by a small group of former CCA members who wanted an organization that could take on local projects without having to deal with the national bureaucracy,” Crescitelli said. “The kind of stuff we could point at and say, ‘we did that.’ Besides purely conservation and fisheries-based initiatives, we take great pride in our ‘Hooked for a Lifetime’ program. Last year we took 200 kids out for a day of fishing. Each one was given a rod, reel and tackle box, plus a basic fishing instruction manual at the end of the day. We took them to local fishing piers that they can return to on their own, and hopefully instilled in them the wonder we have for the sport and the environment. Last year there were two groups, one comprised of low-income inner city kids. The other group was all kids with autism who have a harder time getting involved in sports that require a lot of interaction with other people. Fishing is something they can learn and enjoy in small groups or individually, and it seems to be quite beneficial for many of them.”

“FISH ON!” Crescitelli shouted as one of the rods bent over under the pull of a nice striper. His friend Tom was on it in a flash working the fish expertly as it took off a good bit of line on the first run. A few minutes later, Crescitelli was netting a fat 22-pound bass. He removed the circle hook from the corner of its mouth, held it up for a few quick pictures, held it in the water to revive, and away it swam. No doubt it would be heading up the Hudson in a few short weeks to spawn.