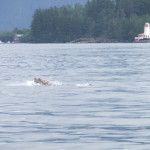 Some of my best memories of the Alaska trip three years ago are of critters I can’t hunt or catch. Whales, sea lions, seals, orcas and dolphins all accompanied us on our cruise and we saw some of them most every day. And the day we visited a glacier and watch it calve, hearing the thunderous roar as huge chunks of ice fell into the bay, was amazing.

The first day out of Juneau we cruised into an arm of a fiord formed by glaciers over the past thousands of years and started seeing icebergs. The further up the fiord we traveled the thicker the ice got. While standing on the bridge beside the captain an watching the beautiful floating ice cubes I spotted movement.

Through binoculars I could see a spout and thought it might be dolphins, then saw something bigger, black and white, surface for a second. I asked the captain if there were killer whales in this area and he said yes, they came in there to hunt the harbor seals that had pups on the ice floes. I pointed out the movement to him and soon we spotted a pod of orcas surfacing as they moved up the fiord.

We were able to follow them for many minutes, watching as one big male with a huge dorsal fin kept to himself. Females, a couple with smaller versions of themselves, were closer together. The calves kept close to mama, following her every move.

A few days later we were halibut fishing and a big pod of orcas came by. Some would breech, jumping completely out of the water. A couple of the skiffs followed them but we kept fishing, trying to get our limit of halibut. Our boat got five that day for four fishermen, better than any of the others, but we missed most of the orca show.

For all one afternoon we cruised among humpback whales. At first when we saw the big spouts as they blew before diving everyone got excited. Several hours late they had to do something spectacular to draw an “ooh” or “ah,” like a breech by jumping out of the water or tail or fin slap. One whale slapped its long pectoral fin over and over. Later one slapped its tail repeatedly.

We were not allowed to approach them but several times they swam right up toward the ship. We watched one dive and blow a bubble ring, then come up in it to eat the small fish trapped by its “net.” At times we could see a dozen or more whales at one time.

A huge colony of Stella Sea Lions made lots of noise and smelled horrible, even from a couple of hundred yards out from where they fought on the beach. It was amazing, the sand and rocks were solid with their huge bodies and every time one moved several around it seemed to get mad and make noise, so the whole time there was constant movement and fussing.

The day we visited the glacier we got within a quarter mile of its face in the 18 foot skiffs and drank hot chocolate, braced with a little Bailey’s Irish Cream, while chunks of ice the size of our bigger ship fell into the water. The waves they created made big swells that made us hold on, even a quarter mile away, and ice bergs that fell earlier floated all around the skiff.

We watched harbor seals swim around us and lay on ice bergs near the glacier. Some of the bergs were an unbelievable blue, a color you just don’t normally see. And small dolphins often swam near the ship in their constant hunt for food.

A trip like this makes me realize how much wildlife there is left in places man has not destroyed – yet.