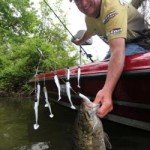 The Alabama Rig and its inventor Andy Poss

Man Behind the Controversial Alabama Rig

By Brad Wiegmann
from The Fishing Wire

Every angler has an opinion on the Alabama Rig. Even bass tournament trails are divided on sanctioning it for use during tournaments. For or against it, the Alabama Rig has changed the fishing industry, bass tournaments and one man’s life forever.
Andy Poss, lure designer and inventor of the Alabama Rig, couldn’t have fathomed the controversy that his lure would create. Professional bass anglers are taking sides either steadfast for or adamantly against it. The debate rages on every fishing website with the naysayers claiming it will be the doom of bass fishing while other anglers point out there is no legitimate argument that it harms bass populations.

For Poss, the Alabama Rig was a lure that he had designed to catch fish like stripers, smallmouth, largemouth and other gamefish once they start feeding on shad. It was so effective that Poss once won 19 of 21 bass tournaments he entered. “Most anglers were bringing in 15 pound stringers and we would have around 28 pound stringers. We hardly ever had less than 25 pounds,” recalled Poss.

All the controversy seems strange to Poss over the Alabama Rig. “When I was 14 or so my Dad, Houston, a well-known lure designer and builder, would drop me off to go fishing in the morning at city lake and pick me back up in the afternoon. Everything about fishing was uncomplicated back then,” said Poss.

Later, Poss would make a living diving for mussels on the Tennessee River. During this time, he learned about rivers and how fish related to structure, cover and bait fish. He would use this knowledge to design and build the Alabama Rig.

Life for Poss all changed in August of 2009 when he built the first Alabama Rig–although he didn’t sell the first one until July of 2011 for $25. “I filed for a Patent on December 12, 2010 and officially filed with the United States Patent and Trademark Office on February 12, 2011. We met with Mann’s Bait Company in November of 2011 and signed a three year OEM Licensee and Trademark agreement on December 4, 2011,” recalled Poss.

Before signing the contract with Mann’s Bait Company, Poss and his wife Tammy did everything when it came to producing the rigs–building, taking orders and shipping. It consumed their lives and over took the house. “The house was the command center where we would build them, take the orders and package them for shipping,” explained Tammy.

Family members and friends pitched in to help out. At the peak of the selling frenzy, Poss had ten people bending wires and even that wasn’t enough to meet the demand.

Demand for the Alabama Rig brought about unbelievable prices on EBay and soon other lure builders were capitalizing on Poss’s invention.

“I saw some being sold on EBay from $99 to $600 at one point Sunday night after Paul Elias won the FLW Tour Tournament on Lake Guntersville in Alabama,” noted Poss. Through it all, Poss never changed the cost of the Alabama Rig, keeping it at $25, and built in the USA.

“We never jacked the price up to take advantage of anglers like others did during that time. We even went up to a Kentucky Lake Everstart tournament and sold them to anglers at $25 insuring that they weren’t going to be taken advantage of by tackle stores selling them at a high price,” acknowledged Poss.

Once the Alabama Rig took off, Poss put his fulltime job as a pipe fitter on hold. A union worker with all the benefits it was one of the biggest decisions he would ever make.

Now Andy and Tammy are waiting for a decision from the United States Patent and Trademark Office on the Patent they applied for back in 2010. “It’s really taken a toll on me, my family and friends. Really it’s just the uncertainty of it all that has me concerned,” Poss continued, “everyone assumes that if you designed a lure that created such a demand you would be rich or would get rich, but that’s not the reality of it.” Copycats and knock-offs in the fishing industry siphoned substantial potential and future income from Poss.

Knowing what Poss knows today, he would approach it differently next time. “If I had to do it all over again, I would build 250,000 of them along with a line of jig heads, soft plastic swimbaits, hats, shirts and other items we could sell,” insisted Poss.

Poss noted that the boost in sales directly related to terminal tackle like snaps, jig heads, swimbait hooks and swivels was just the jolt the fishing industry needed. Sales of terminal tackle was rivaled only by soft plastic lures that anglers were rigging the Alabama Rigs which require multiple swimbaits or spinnerbait blades to rig.

If Poss is issued a patent, the next phase of his life will be extremely challenging, but that’s another matter all together. Right now all Poss can do is pray and wonder while waiting for the patent outcome.