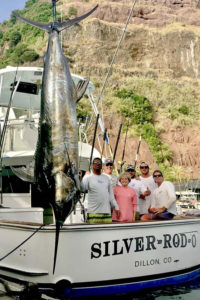 Destin, FL – Trackers of trophy blue marlin call it “wiring,” wrapping lengths of wire or monofilament leader round and round your hands in hopes of finally bringing the big fish aboard. You’re just praying the furious bluewater giant doesn’t dismember your digits, or worse, pull you overboard with a single thrash of its weaponized skull.

Consider for a moment the primeval power of an 800-pound pelagic sportfish, amped up and attached to a hook on one end and your hands on the other. Imagine what can happen when a fish that big decides to sprint 50-miles an hour, and the potential for destruction to your hands—or your life. Now realize that the only thing protecting you is the right pair of gloves.

Some say luck is what happens when preparation meets opportunity—an apt description of actually landing a giant blue marlin. For Gary and Sherrell Carter and their expert crew, locating, battling, wiring and finally boating a record-class marlin only happens when a thousand different possibilities fall perfectly in to place. Give or take a few tense moments, that’s exactly what unfolded on Monday, August 13, off the coast of Madeira Island, Portugal.

The Carters, a husband-and-wife team who began chasing dreams of colossal marlin in 2000, had just about wrapped their 35th day on the water when a silver-blue leviathan emerged behind their boat, the Silver-Rod-O. “In the nine long days leading up to August 13, we had only seen a single blue marlin,” recalls Gary Carter, holder of numerous IGFA line-class records. “It was 4:20pm and we were about to call it a day when all of a sudden a big fish came up in hot pursuit of our right long teaser.”

Special ‘wiring gloves’ protect hands from wraps of heavy leader while also freeing fingertips for essential tasks with tackle.
For the Carters and the four other members of the Silver-Rod-O team, the game is to pull a large, hookless, squid-like teaser behind the boat in hopes of enticing a blue marlin to the surface. That day, when Yoan Alcala, the Venezuelan captain of the Silver-Rod-O, spotted and called out the astonishing size of the pursuing fish, the crew flew into immediate action. The Carters quickly decided Gary would wield the “bait-and-switch” rod, rigged with 20-pound test and a squid. “Andy continued teasing the fish toward the boat, I made the pitch and when the bait intersected the track of the marlin, Andy quickly jerked the teaser away and the marlin pilled on the hooked squid. We were in the battle.

“The fish stayed within 300 yards of the boat throughout the fight—actually fairly close— giving us several really nice jumps. One hour and ten minutes in, the blue made a mistake and Andy Dow, our great wire man from Australia, was able to get a solid grip on the leader with his Fish Monkey Wiring Gloves. With only a 15-foot leader to work with, in order to do this properly, you have to be right on top of the fish. You need the exact perfect angle, and Andy pulled it off impeccably; got a great wrap and then another. At that point, Yefry Garcia made an excellent gaff shot followed by Brad Batterton with another.”

Back at the harbor, Carter and crew watched as the certified scale rolled to 366.0 kg (807 pounds). This now-pending IGFA World Record, if approved, will eclipse the current IGFA 20-pound test record Atlantic blue marlin by a substantial margin. (The current record, according to Carter— an IGFA trustee and active member of The Billfish Foundation— sits at 714-pounds, a fish caught off the Ivory Coast of West Africa in 1990.) After filing all necessary paperwork, photography and a line sample, Carter says IGFA certification typically requires a minimum of 90 days.

Interestingly, all the way back in May 1999, Carter achieved his first the Royal Slam, catching all nine billfish species in less than a year. Additionally, the IGFA recognized the Silver-Rod-O with an Outstanding Achievement Award; it was the first time all of the Atlantic and Pacific species of marlin were caught by one angler from the same vessel. In addition to the 807-pound blue, the angling couple has broken records with fish on 16, 12, 8, 6, 4, and even 2-pound test.

Reflecting on his recent catch and all that unfolded those 35 days at sea, Carter quickly praises his team. “This is a team accomplishment, not an individual one. Nearly every member of my crew is highly skilled and focused on the task—even after countless hours on the water. Most all of us rely on Fish Monkey gloves to perform our assigned task. Both my gaff men—Yefry Garcia and Brad Batterton—don a pair of Fish Monkey Crusher gloves for protection from the sun, the fish and the elements. We do the same while fighting fish.

Fish Monkey’s Crusher has proven itself as an exceptionally versatile fishing glove, endowed with UPF 50 sun protection and Kevlar-reinforcements that prevent cuts from leader, wire and fish.
“The wiring gloves Andy wears have a special Kevlar fabric, which keeps line from cutting and puncturing the skin. Underneath, layers of hard and soft EVA padding keep heavy leader material from crushing down. And the fabric itself offers minimal friction, so leader can slip off the glove quickly and easily—an absolute key to successful wiring. The gloves also have exposed fingertips for dexterity and handling rods and tackle.”

In quantifying the role of Fish Monkey Wiring Gloves, Carter gives credit to another legendary marlin man. “My friend Tim Mossberg, founder of Fish Monkey Gloves, worked closely with Captain Charles Perry—the most accomplished wire man in the history of the sport—to develop these specialized gloves. They’re simply the best and only ones we’ll use when a big fish is on the line.”

No one is sure where the Fish Monkey first appeared. Some said it was in the mountainous jungles of Guatemala near the old Mayan ruins at Tikal, or at the foot of the volcano they call Fuego. Others said it was on the beaches of Isla Mujeres, Mexico’s famed Isle of Women. Still others reported seeing the mysterious creature in other places around the world: Hawaii, Australia, Costa Rica.

But all the reports had one thing in common: wherever there was good fishing, the Fish Monkey was there as well. It was reported to have a phenomenal grip, stronger and more secure than any human could ever have. No matter how slick or slimy, the Fish Monkey could handle the situation with ease.

With those legends in mind, the founders of Fish Monkey Performance Gloves set about to replicate that world-famous grip. Fish Monkey is the world’s premier manufacturer of gloves designed specifically for the water. Whether you’re on the deck of a sport-fishing boat wiring a thousand-pound blue marlin off Bermuda, casting jigs and poppers to giant trevally in the Pacific or poling a flats skiff in less than a foot of water off the Bahamas, Fish Monkey has a glove that’s designed just to fit your needs. Extremely durable, with padding in just the right places, and a fit like a second skin. Protection from sharp teeth and the sun. And all with that legendary Fish Monkey grip.

So when you demand the very best protection for your hands, reach for Fish Monkey Performance Gloves. Become part of the legend.